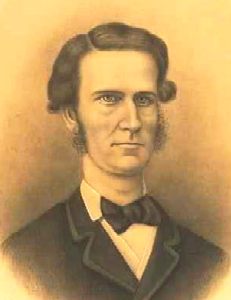 Hold hard Ned! Lift me down once more and lay me in the shade
Old man, you’ve had your work cut out to guide
Both horses, and to hold me in the saddle when I sway’d
All through the hot, slow, sleepy, silent ride.

Now westward winds the bridle that leads to Lindisfarm
And yonder looms the double headed Bluff
From the far side of the first hill, when the skies are clear and calm
You can see Sylvester’s woolshed fair enough

Five miles we used to call it from our homestead to the place
Where the big tree spans the roadway like an arch
‘Twas here we ran the dingo down that gave us such a chase
Eight years ago – or was it nine? – last March

‘Twas merry in the glowing morn, among the gleaming grass
To wander as we’ve wandered many a mile
And blow the cool tobacco cloud and watch the white wreaths pass
Sitting loosley in the saddle all the while

‘Twas merry ‘mid the blackwoods, when we spied the station roofs
To wheel the wild scrub cattle at the yard
With a running fire of stockwhips and a fiery run of hoofs
Oh, the hardest day was never than too hard!

Aye, we had a glorious gallop after “Starlight” and his gang
When they bolted from Sylvesters on the flat
How the sun-dried reed beds crackled, how the flint strewn ranges rang
To the strokes of “Mountaineer” and “Acrobat”

Hard behind them in the timber, harder still across the heath
Close behind them through the tea tree scrub we dashed
And the golden tinted fern leaves, how they rustled underneath
And the honeysuckle osiers, how they crashed!

We led the hunt throughout, Ned, on the chestnut and the grey
And the troopers were three hundred yards behind
While we emptied our six-shooters on the bushrangers at bay
In the creek with stunted box tree for a blind!

There you grappled with the leader, man to man and horse to horse
And you rolled together when the chestnut reared
He blazed away and missed you in that shallow watercourse
A narrow shave – his powder singed your beard!

In these hours when life is ebbing, how those days when life was young
Come back to us, how clearly I recall
Even the yarns Jack Hall invented and the songs Jem Roper sung
And where are now Jem Roper and Jack Hall?

Aye, nearly all our comrades of the old colonial school
Our ancient boon companions, Ned, are gone
Hard livers for the most part, somewhat reckless as a rule
It seems that you and I are left alone

There was Hughes, who got in trouble through that business with the cards
It matters little what became of him
But a steer ripped up MacPherson in the Cooraminta yards
And Sullivan was drowned at Sink-or-swim

And Mostyn – poor Frank Mostyn – died at last a fearful wreck
In “the horrors” at the Upper Wandingong
And Carisbrooke, the rider, at the Horsefall broke his neck
Faith the wonder was he saved his neck so long!

Ah, those days and nights we squandered at the Logans in the glen –
The Logans, man and wife, have long been dead
Elsie’s tallest girl seems taller than your little Elsie then
And Ethel is a woman grown and wed

I’ve had my share of pastime, and I’ve done my share of toil
And life is short – the longest life a span
I care not now to tarry for the corn or for the oil
Or for the wine that maketh glad the heart of man

For good undone and gifts misspent and resolutions vain
‘Tis somewhat late to trouble, this is know –
I should live the same life over, if I had to live again
And the chances are I go where most men go

The deep blue skies wax dusky and the tall green trees grow dim
The sward beneath me seems to heave and fall
And sickly, smoky shadows through the sleepy sunlight swim
And on the very sun’s face weave their pall

Let me slumber in the hollow where the wattle blossoms wave
With never stone or rail to fence my bed
Should the sturdy station children pull the bush flowers on my grave
I may chance to hear them romping overhead.