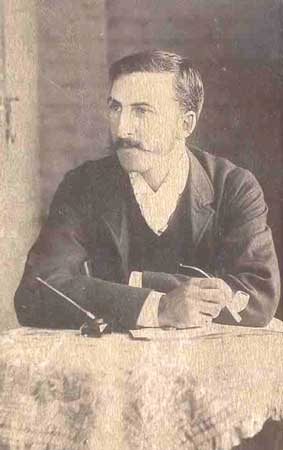 Born in Sydney, Boake worked as a surveyor and a boundary rider, but is best remembered for his poetry, a volume of which was published five years after his death.

The first flush of grey light, the herald of daylight,
Is dimly outlining the musterer’s camp,
Where over the sleeping, the stealthily creeping
Breath of the morning lies chilly and damp,

As, blankets forsaking, ‘twixt sleeping and waking,
The black-boys turn out to the manager’s call;
Whose order, of course, is, “Be after the horses,
And take all sorts of care you unhobble them all.”

Then, each with a bridle (provokingly idle)
They saunter away his commands to fulfil –
Where, cheerily chiming, the musical rhyming
From equine bell-ringers comes over the hill.

But now the dull dawning gives place to the morning,
The sun, springing up in a glorious flood
Of golden-shot fire, mounts higher and higher,
Till the crests of the sandhills are stained with his blood.

Now the hobble-chains’ jingling, with the thud of hoofs mingling,
Though distant, sound near – the cool air is so still –
As, urged by their whooping, the horses come trooping
In front of the boys round the point of the hill.

What searching and rushing for bridles and brushing
Of saddle marks, tight’ning of breastplate and girth;
And what a strange jumble of laughter and grumble –
Some comrade’s misfortune the subject of mirth.

I recollect well how that morning Jack Bell
Had an argument over the age of a mare,
That C O B gray one, the dam of that bay one
Which Brown the storekeeper calls the young Lady Clare.

How Tomboy and Vanity caused much profanity,
Scamping away with their tales in the air,
Till after a chase, at a deuce of a pace,
They ran back in the mob and we collared them there.

Then the laugh and the banter, as gaily we canter,
With a pause for the nags at a miniature lake,
Where the “yellowtop” catches the sunlight in patches,
And lies like a mirror of gold in our wake.

Oh! the rush and the rattle of fast-fleeing cattle,
Whose hoofs beat a mad rataplan on the earth;
Their hot headed flight in! Who would not delight in
The gallop that seems to hold all that life is worth.

And over the rolling plains, slowly patrolling
To the sound of the cattle’s monotonous tramp,
Till we hear the sharp pealing of stockwhips, revealing
The fact that our comrades have put on the camp.

From the spot where they’re drafting the wind rises, wafting
The dust, till it hides man and beast from our gaze,
Till, suddenly lifting and easterly drifting,
We catch a short glimpse of the scene through the haze.

What a blending and blurring of swiftly recurring
Colour and movement, that pass on their way
An intricate weaving of sights and sounds, leaving
An eager desire to take part in the fray:

A dusty procession, in circling succession,
Of bullocks that bellow in impotent rage;
A bright panorama, a soul stirring drama,
The sky for its background, the earth for its stage.

How well I remember that twelfth of November,
When Jack and his little mare, Vanity, fell;
On the Diamantina there never was seen a
Pair who could cut out a beast half so well.

And yet in one second Death’s finger had beckoned,
And horse and bold rider had answered the call
Brooking no hesitation, without preparation,
That sooner or later must come to us all.

Thrice a big curly horned Cobb bullock had scorned
To meekly acknowledge the ruling of fate;
Thrice Jack with a clout of his whip cut him out,
But each time the beast galloped back to his mate.

Once more, he came blund’ring along, with Jack thund’ring
Beside him, his spurs in poor Vanity’s flanks,
As, from some cause or other forsaking its mother,
A little white calf trotted out from the ranks.

‘Twas useless, I knew it, yet I turned to pursue it;
At the same time, I gave a loud warning to Jack:
It was all unavailing, I saw him come sailing
Along as the weaner ran into his track.

Little Vanity tried to turn off on one side,
Then altered her mind and attempted to leap;
The pace was too fast, that jump was her last,
For she and her rider fell all in a heap.

I was quickly down kneeling beside him, and feeling
With tremulous hand for the throb of his heart.
“The mare – is she dead?” were the first words he said,
As he suddenly opened his eyes with a start.

He spoke to the creature, his hand could just reach her,
Gently caressing her lean Arab head;
She acknowledged his praising with eyes quickly glazing,
A whinny, a struggle, and there she lay dead.

I sat there and nursed his head, for we durst
Not remove him, we knew where he fell he would die.
As I watched his life flicker, his breath growing thicker,
I’d have given the world to be able to cry.

Roughvoiced, sunburnt men, far away beyond ken
Of civilisation, our comrades, stood nigh,
All true hearted mourners, and sadly forlorn, as
He gave them a handshake and bade them goodbye.

In my loving embrace there he finished life’s race,
And nobly and gamely that long course was run;
Though a man and a sinner he weighed out a winner,
And God, the Great Judge, will declare he has won.