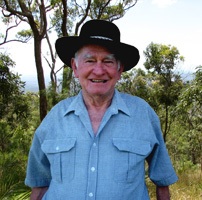 Writer of Bush Poetry tips on this site.

The amazing resurgence of Performance Bush Poetry over the last few years has worked wonders to restore a flagging art.

A good performance poem, however, is not necessarily a good written poem. Give a good performer a poem that is funny – a little rude, even – and he/she can stretch or cramp the stress and place the emphasis where needed to make it flow and be hilariously entertaining.

Place the same poem under bare scrutiny on a written page and the faults are obvious. I believe both performance and written poetry have an important part to play in this fascinating world of Bush Verse. Some poets make a good job of both.

The wonderful poetry of Paterson, Lawson and Ogilvie should not be allowed to become a thing of the past. A number of poets across Australia are making a valiant effort to keep this Bush Verse alive and up to a high standard. Take a look at Veronica Weal’s Blackened Billy winner in last issue of the ABPA, for example. What a pleasure it is to read.

Writing and performing Bush Verse is my great love, but I regard it as two different arts. Neither of my most successful performance poems (Beach House Honeymoon and Luck Can Vary) have won a major award in written competitions.

A few years ago I came up with the idea of using the analogy of the human body to explain the structure of Bush Verse. Content is the Body, Rhyme is the Heart and Metre is the Soul. A person may have a perfect body but not be really complete without a heart and soul, so it is with Bush Verse.

A wonderful story does not make a good poem without good rhyme and metre. The tips I give are for the love of Bush Poetry and a desire to help my fellow poets. If anyone exploits my ideas through workshops etc. for profit (without my express permission) I will be extremely disappointed.

As I mentioned above, Rhyme as the heart of good Bush Verse. It is very much a natural part of Traditional Australian Poetry. Even a small child might write “Jimmy Brown went to town” or “A big cat chased a rat”. That is good rhyming, but it is not so simple when one has to make it a natural part of the story being told and fit into the metre pattern.

I try hard to use perfect rhyme at all times and do my best to avoid forced rhyme, half rhymes, sight rhymes or substitute assonance for rhyme.

“A drover rode his horse along the lane – and watched by people through the window pane”, is perfect rhyming but poorly constructed verse.

The author has deviated from the story merely to get a rhyme. That is forced rhyme. Write “The drover rode his horse along the lane – and cursed the driving wind and sleety rain”. We again have a perfect rhyme but now have better rhythm and sounds more natural.

Sight rhymes are ‘bush’ and ‘hush’ or ‘town’ and ‘sown’ or ‘rough’ and ‘though’. They look the same to the eye but are pronounced differently. Some poets use these, but I prefer not to.

Another doubtful one is words like ‘distribute’ — ‘repute’ . . . They look good and I expect most poets would use them. But ‘disTRIBute’ has the stress on the middle syllable while ‘rePUTE’ has it on the last syllable. A bit tricky?

Rhyming on the weak stress is not usually successful but can be made work if it follows a strong stress, e.g. ‘flowing’ – ‘mowing’ – or ‘racing’- ‘chasing’ or ‘flying – ‘dying’. You can go one step farther and have triple rhyme e.g. ‘thundering’ – ‘blundering’ or ‘beckoning’ – ‘reckoning’.

Or four if you like with ‘reflectively’ – ‘effectively’ – or ‘demonstrative’ – ‘remonstratvie’. Or five with words like ‘unconventional’ – ‘unintentional’. But one needs to be fairly conversed in the art of poetry to try some of these.

Many confuse assonance with rhyme. Assonance is the repetition of vowel sounds. ‘Sheep’- ‘wheat’ – ‘squeak’ have the same internal vowel sounds but each ends with a different letter. Likewise ‘squall’ – ‘squat’ – ‘squaw’ – or ‘pool’ – ‘shook’ – ‘door’.

I believe metre is the most important ingredient of Bush Verse – hence ‘the Soul of poetry’. Metre is, however, the hardest thing to learn about writing good Bush Verse.

While it can be learnt I believe it is, to a certain extent, a God-given gift. It comes naturally to some poets, most have to work hard at it and some seem to find it impossible to grasp. Metre is actually rhythm and anything that jars or interrupts the regular flow of the rhythm spoils a poem.

A very common one is where a poet establishes a pattern of Iambic metre – that is weak, strong, weak, strong – then suddenly has two weak or two strong syllables following each other.

This has a jarring effect and can spoil a good poem. There are many different patterns that one might use but I advise poets not to be too ambitious.

A metre pattern of between ten and fifteen syllables per line is recommended, rhyming either AABB or ABAB. If less than ten syllables are used I find it has a tendency to become stilted – unless the author is an accomplished poet.

On the other hand more than fifteen syllable put the rhymes too far apart and they lose impact.

Iambic, as I have just mentioned, is a simple stress pattern to begin with and quite effective. Equally simple and effective is Trochee, whish is the reverse, having strong, weak, strong, weak.

But these are more difficult and not recommended unless the poet is quite accomplished.

If your rhyming pattern is AABB every line needs the same stress pattern. However it is not strictly necessary if your rhyming pattern is ABAB. Then your two A lines must be the same stress but the two B lines can be a different stress pattern to the A lines, providing the B lines are identical stress. I’m sorry if this sounds complicated, but I warned you at the outset that metre is the hardest thing to grasp. Do the hard yards and you’ll find it worthwhile.

I will use the first stanza of my poem, “Nostalgia’s Disillusion” to demonstrate a simple, but effective, stress pattern.

AS i STAND and GAZE a-BOUT,

On ROADS that LEAD to NO-where,

THROUGH a SEA of NOTH-ing-NESS,

there’s LITT-le ELSE, i GUESS.

Read this poem (my book, The Gloss of Bush) and you will see this pattern has been maintained meticulously throughout the six stanzas.

NB. The ideas expressed in this column are entirely my own – plus an occasional piece of sound advice from my learned friend Ron Stevens. They may not necessarily be correct, but they do work for me.