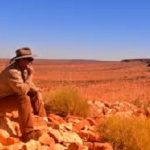 I had met an old codger on several occasions while fishing.
Each time he told the same sad story of how his dog was now his best
friend since his wife had passed. I dreamt about them one night
of how they found happiness.

The old bloke slept there peacefully, his eyes now growing dim;
old Cobber, the dog he cherished, was resting close to him.
They were still, both dreaming of their younger years gone by,
not thinking one day this may end - a time to say goodbye.

Cobber dreams he is in the bush, playing close by a stream,
and being with his master - reliving 'the old times' dream.
He is living all the fun times and places they have been
hunting, fishing, camping, and the times in between.

The old bloke dreams of special days before his dear wife died;
(He never got over losing her, for he often cried.)
Yet, this night would hold a blessing for both him and his dog,
he was at his fishing hole, his wife with him on the log.

And with his wife and trusty dog, he lay there quite content,
and to his old bush hut that night, are heaven's angels sent.
The angels came to rescue them while they peacefully slept;
a close bond not to be broken - together, they're both kept.

Then lifted above on angels wings, he and Cobber went
to continue loyal time, their shared life on earth now spent.
Toward the stars and sunlit skies did he and Cobber soar,
to be united with his wife and happy evermore.