Ric is the webmaster of bushverse.com. He wrote it back in 1999 when the internet was a baby. He has written several pieces of bush poetry and also plays guitar and sings old bush songs.

Dennis grew up a south Queenslander. At Warwick, Pittsworth and later Dalby, Dennis was introduced to the livestock industry as a young child, and virtually “grew” into it.

Dennis left school to work in the Agency industry. With a natural flair for cattle, his early contact with Meat Processing legend Fred Keong, took him deeper into the world of cattle buying, meat wholesale and export, and opened up a career which would see him part owner of a meat wholesale business in Sydney, through to 1978.

Fourteen happy years at “Burrendoon” Tenterfield got him back to the bush, where he truly belongs.

Dennis, his wife Bev and their four children came to Brisbane in 1992, when he accepted a position as Marketing Manager with the giant Pastoral Group, Australian Agricultural Co. AACo’s acquisition in 1996 by the Elders Group, drew the path of his working life to a full circle, when in 2000, as well as continuing responsibility for the Marketing of AACo livestock, Dennis was appointed Queensland Livestock Manager of the Elders Group.

Dennis finished full time work in July 2003, and continues in the industry he loves so much, consulting on a part time basis, to Government in the Transport and Primary Industry areas, Australian and International investors, and Australian cattle Producers and Processors.

Music and words have always been a part of his life. With a natural ear for music, and a love of words and language, they have been his stress relief “management,” through his working years. Dennis began writing poems in 1998, drawing on the colourful and exciting world of the livestock market. With a deep faith, and an earthy sense of humour and experience, his poems reflect a balance of life that entertains and appeals. He began presenting his poems only in 2004, when he won through to the finals of the prestigious “Oracles of the Bush” competition at Tenterfield, which he repeated in 2005.

He is the Convenor of the Redlands Poets Society, and particularly enjoys the interaction of a number of Poets’ groups in the wider area. When asked what gives him a special “buzz,” he replied: “My great joy is sharing the gift of word and music – there can be nothing better, than giving back – sharing – something that has brought us joy.” Dennis is a keen bushwalker and kayaker. Main Range National Park and Moreton Bay are his favourite outdoor spots. Family get togethers, with Bev, four children and five grandchildren, and sharing his words and music, are his special moments. 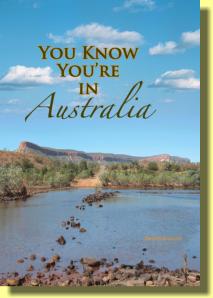 Dennis has a new book out which has been released in mid 2006. It is 128 pages (32 of which are full colour), and is double stitched in a Cello Gloss hard cover

The book is a tribute to Australia: the Country and the People. It features 35 original poems, supported by 3 original paintings by successful Artists, and high quality photographs of places and people throughout Australia. A good mix of humour and pathos – part fact, part fiction, but all great Aussie fun!! Book Industry people in Brisbane who are going to stock the book have all said it is of a very high quality, and presents at the top end of recent publications. Dennis says, “We are very proud of what we have managed to put together, and look forward to sharing it with Poets and readers alike.”

The book normally retails for $35, but for readers of the Australian Bush Verse, Poetry & Music site, Dennis is offering the book for $30 which includes postage. This is for cash or cheque sales only. Credit card sales are available, but will be at $35.

Dennis can be contact by phone or email, the details of which are below.