The Ballad of the Bushmans Club (or Paradise Lost) 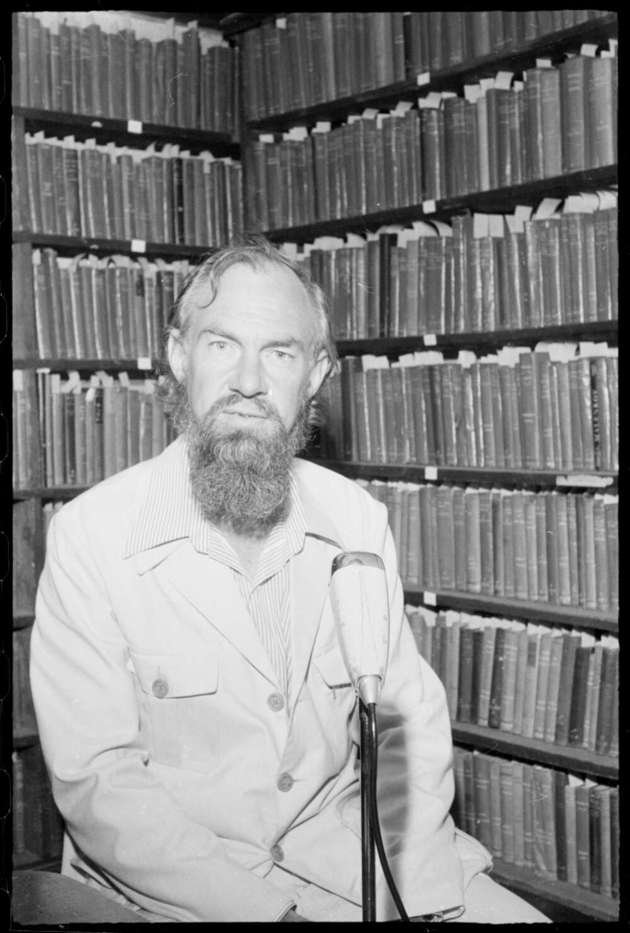 Graham Jenkin is an Australian poet, historian, composer, and educator. In 1968 Graham Jenkin, together with three other musicians, formed The Overlanders who performed Australian Bush Music.

Now theres a joint across in Sydney, I suppose you jokers know,
Where the hardest-riding stockmen and the great gun shearers go,
And its something of a lovers den and something of a pub,
And its known to Sydneysiders as "That flamin’ bushmans club".
Its the most tremendous place on which I’ve ever cast me eye,
Including Mac’s at Broken Hill where we used to spin the swy,
For the grog flows by the bucketful, and the women – strike me blue –
They’re all of ’em dressed like Cloey, and they’re twice as pretty too,
For this is a place of worship of that noble little push,
Who comprise the famous Brotherhood of Bludgers from the bush,
Their noble, high and lofty aim to fight for all things freer,
And strive for the Two Great Freedoms: free women and free beer.
And valiantly they carry on their noble cause to fight;
They start right at the crack o’ dawn and rollick on through the night,
With revelry and sport galore and girls and grog and song –
No wonder that the waiting list is half a mile long.

So to keep the place exclusive, so they only get the best,
Each budding, would-be brother has to pass a little test.
You have to shear three hundred sheep a day with either hand,
Ans duff a thousand bullocks on your own and change the brand,
And drove ’em down the Birdsville when the Cooper’s on her way,
Then sink a well through granite rock at fifty feet a day;
And cut a mile of mulga posts and sink the bludgers down,
And break a dozen killer-colts and ride ’em into town,
And live for a year on damper which you make from weevil flour,
Then drink a keg of Bundaberg – in just a half an hour,
And many another little skill that only the best can do –
I passed them all with credit and a top distinction too.
But the last examination is some yarns you have to tell –
They must be lies, original, and you have to spin ’em well.

Well, I stood before the Panel, in a highly nervous state
And began to tell my story from a very early date:
I told ’em how, at the age of twelve, I dug that excavation,
For the Government, which is now called the Great Artesian Basin;
How, when I’d dug the mullock out, I carted it aside,
And nowadays people call that heap o’ dirt The Great Divide.
I told ’em how I swum the old Pacific in a gale,
And made the homeward journey in a bath-tub with a sail;
How I used to work the windmills in a calm, for my old man,
By running like a lumber-jack on top o’ the flamin fan;
But I fell from a Southern Cross one day with a tin in me pocket here –
I’ve still got "Capstan Fine Cut" printed firmly on my rear!
’Twas me alone who finally rode Old Curio and her brother
While I done the flash with one hand, rolled a querlie in the other.
And once I won the Melbourne Cup on an untamed brumby mare,
But they went and took it orf me – ridin’ backwards wasn’t fair!
And I was the bloke who tried to ride to Tassie on a bike,
Lost me bearings, got a puncture on a ruddy coral spike,
Missed the Apple Isle completely, so I almost met me death,
But I surfaced in New Zealand – very nearly out of breath!

And I once flew to Canberra when me mate the P. M. wired,
And I would have flowen back here, but me flamin’ arms were tired;
I lost Victoria River in a crooked two-up school
And I boozed me other stations in a fortnight – what a fool!
But ’twas me who floored Carruthers in the fifty-second round,
Of a private little battle for half a million pound,
And I ran the mile, two minutes flat, but I never staked me claim,
"Cause I’m not the sort of bloke who likes to brag and climb to fame.
And I could have gone forever reminiscing to the Board,
But at last they yelled, "No more! Shut up! You’re in!" – And I was floored.

You can just imagine the tears of joy one sheds at a time like this,
When you’ve passed the test to paradise – and near-eternal bliss –
Then think what an awful shock it was, when I’d been there just a week,
And one of the Elder Brothers comes and grabs me by the cheek
And says to me, "The Panel rules that you will have to go;
You bluffed us on that final test." And what he said was so.
For though at other bushy skills no stockman e’er ranked higher,
I never was or will be worth a cracker as a liar.
I dunno how they done it, ’less one of the panel knew,
But somehow they discovered that all of me yarns were true!