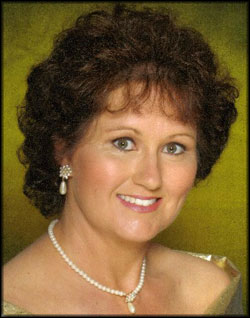 Kym comes from Biloela in Queensland and has written quite a bit of poetry. Her love of horses certainly shines through in her writings.

I was born Kym Jensen in Biloela, Central Queensland, the eldest daughter of a farmer. Being a typical horse-crazy female, I spent most of my youth on horseback.

My first job was at the Bank of New South Wales (now I’m showing my age), which is now known as Westpac. The next eleven years were spent working in the office at the Callide Coalfields, working my way from receptionist, through accounts payable, payroll, stores clerk, encoder, Mine Manager’s Secretary and finally General Manager’s Secretary.

In 1985 I married a long, tall Texan, Frank Eitel and five years later we started our family – three daughters in two and a half years! We lived in Texas, USA, for twelve months then moved back to Biloela where we bought an irrigation farm. I worked at Mt Murchison Primary School as Administration Officer for two and a bit years, but gave up work to help Frank on our new farm.

As soon as an opportunity came up, I grabbed the chance and got back into horses (for more information on this sneaky story, you’ll have to read “Toy Ponies” in my book). OK, OK, I’ll tell you . see, Frank doesn’t like horses, so while he was overseas, I bought seven miniature ponies (but four were pregnant, so I guess I really bought eleven horses). Naughty, aren’t I? That was years ago. I still have several mini ponies (as well as a herd of “real” horses for the kids to ride at pony club), and miracle of all miracles – Frank and I are still married.

In 2004 I was diagnosed with Breast Cancer, but two years later – here I am – still around to annoy everyone. Despite operations, chemotherapy, radiation and all that good stuff, I still found plenty to laugh about (gotta laugh while you can, hey). You’ll find a poem about the after-effects of cancer in my book too, it’s called “Jelly Melons”. It’s good for a giggle.

Now For The Poetry Part …

Yes, I keep mentioning my book – it’s called “Wild Horse Rain”. After my bout with cancer, I realised that we don’t always have next year, next month, or next week, to do the things we think we have “the rest of our life” to achieve. I wanted to publish a book before I went toes-up. Not for the fame, not for the money. Just to say “I did it!”

“Wild Horse Rain” is a combination of Award Winning Poems and some of my personal favourites. I have won awards in written competitions such as The Man From Snowy River (Original and Humorous 2005), The Beaudesert Country and Horse Festival, Tenterfield’s Oracles Of The Bush, the John O’Brien Festival, as well as two Highly Commendeds in the 2006 Blacked Billy Awards, and many placings at other competitions (too many to list here). Some of my works have been recorded on ABC’s “Outback Visions” CD, published in the Bronze Swagman Book of Bush Verse (2002, 2004 and 2005), or performed by professional entertainers across Australia, which is very flattering.

Being a country kid, most of my poems are about horses and life in the country. Some of these poems will have you in fits of laughter, while others will tear at your heart strings. There is 100 pages of silly, sad or serious poems, all guaranteed to keep readers interested, intrigued or in tears.

I am very proud to have forewords written by Carol Heuchan (a multi-multi-awarded bush poet and performer) and Guy McLean (two times Australian Bush Poetry Champion and Professional Horseman and Entertainer).

I guess I do OK as a writer, but how do I fare as a performer? Not good. I have tried on several different occasions, but the shaky voice and wobbling knees win every time.

Kym can be contacted via email at kymeitel@yahoo.com