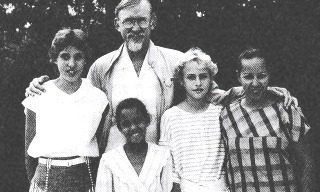 Laurie was a kiap (Patrol Officer in PNG), teacher, writer and poet. There are copies of his book ‘Pretzel Legs’ available on e-bay apparently.

On the Yantabulla road by the Gidgee Gidgee bore
I met a grey-haired swaggy-jack and opened wide my door
“It’s too damn hot to walk,” I said, “and you look awful beat,”
“So hop aboard and rest yourself and save your boots and feet.”
He stood a while, then cracked a smile and climbed up to the cab
And settled back, this country Jack, and tossed aside his swag.”
I eased the old rig forward as I shifted through the gears
And soon was towing dust again and fifty bawling steers

We’d gone about a dozen mile before the swaggy spoke
I guess he was the silent type; a country sort of bloke
He turned his head, and quietly said, his words came hard and slow
“Well tell me, son, is John the one, or is old Kim the go?”
Now the only John I knew was a funeral bloke in Bourke
Who lost a body once or twice and soon ran out of work
And I knew a Kim what’s–his–name who drove for Cobb & Co.
But were these two the sort of blokes a swaggy-jack would know?

I mean to say, a swaggy’s day is pretty drab and lonesome
He doesn’t see much company, he’s mostly on his ownsome.
“I’m afraid I cannot say,” I said, “which of them is best.”
“Unless you give me details – and then I’ll have a guess.”
The swaggy sat for quite a while, his brows were knitted tight
And when he turned and spoke again I understood his plight.
“This ‘lection see,” he said to me, “it would make a dead man grizzle.
“You bloody choose, and still you lose – it’s like gambling on a fizzle.” *

His eyes bulged like a Murray cod – he was fairly hopping
He was narked and fired up and would take a lot of stopping.
“Mate, I gave old John the nod in nineteen–ninety-six
“While working down at Yarrawalla layin’ crooked bricks
“I thought he was a dinkum bloke, or so he seemed to me
“But now he’s brought to life again that flamin’ G–S–T.
“Now, I doesn’t mind me taxes if taxes is all fair
“But I’m buggered if I’ll pay ‘em on Camels and me beer

“If it’s ten–per–cent for Johnny for all me drinks and smokes
“He’s on nothing to a hiding from all us mulga blokes.
“Now Kim he’s got the ticker – we can all be sure of that
“And he could do the boss’s job and wear the boss’s hat
“He isn’t stiff and starchy, he’s a backyard sort of bloke
“Who mixes with the working class and doesn’t mind a joke
“But then he gets the wobbles like the other silly mob
“And says he’ll tax our astets** – Mate, I’ll have ter get a job!”

The swaggy sagged, completely fagged – his ball of string was out
“Oh, mate,” he sobbed, “we’ve all been jobbed – there’s not a bloody doubt.” We rumbled on in silence for the swaggy’s mood was glum
But he brightened by degrees as he sipped his flask of rum
And by the time the ‘Bulla pub was coming up ahead
Old swaggy–jack was on the way and ready for his bed
I booked him in a room of tin, his mood was close to normal
And from his bed he turned and said: “I’ll bloody vote informal.”

* A race horse that falls badly off the pace
** assets