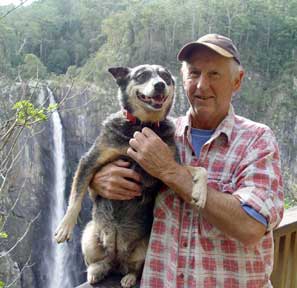 Born in Lismore NSW, Rod worked as a stockman and a shearer. He began writing seriously in 1998.

T’was in late winter sixty–four and I was shearing well–
I lived and dreamed of tallies huge, primed for the morning bell.
Near Tambo (out at “Tolliness”) is where we slaved away–
The sheep were straight and combed and cut, the tallies rose each day.

It was a rare occurrence friends, but four mates (in the draw)–
All wound up shearing side by side, on stands, 1, 2, 3, 4.
To top it off, we all shared rooms and travelled in my car–
Me, Welfare, little Eric Perks and Wrinklestein, The Star.

Now, Pat and Perksy shared one room and I was in with Fred–
I’d clean up all his orange peels, but then short–sheet his bed.
Yes we were all the best of mates and each day we would shine–
Up on the board at Tolliness, as stand–mates in a line.

I had the draw of number one, with Wrinklestein on two–
He was a “Gun” and rung the shed, as pen–mates we were true.
My mentor Fred was number three and Eric number four–
Those Bonza days I cling to still – it’s friendship that I store.

Well, I was chasing this young bloke and almost had him wheeled–
But had a bit of tummy strife, it seems my fate was sealed.
I let the sheep go, belted out and to the dunny flew–
Brown Muscat from the night before, but that’s ’tween me and you.

I ran back like a maniac and grabbed another yoe–
But didn’t see Fred creeping up, deliberate and slow.
As I was throwing mighty blows to keep my rival near–
He disengaged the working drive and whacked me on the ear.

“That bloody hurt”, I screamed out loud, “why did you do that Fred–
I’d nearly rounded Marksy up and now he’s way ahead”!!
He wouldn’t let the “pull–rope” go and then he said to me–
“It is a heinous crime to go and use the lav-a-tree”.

“You’ll never make a shearer mate; you’ll never ring a shed–
If you waste time as you just did, get that into yer head.
Don’t use the dunny through the run, I don’t care if yer bust–
Just bake it up you stupid boy and blow it out in dust”!!

“Now get to work and catch him up”, he pulled me into gear–
My head was ringing like a bell; I had a bright red ear.
Two “wood–ducks” Ringer saved for me, I peeled it off them fast–
I was a belly-wool behind, “I’ll get him now at last”.

But fate is cruel and even though I broke poor Andy’s heart–
I did a very stupid thing, by being young and smart.
A scrubber weather ended up with ewes in our new pen–
I grabbed the wild big “red–eyed” brute, “pulled into gear” again.

Now, Freddie taught me how to shear, a tough sheep, just as fast–
“That’s what’ll break their hearts” he said, “do that and they won’t last”.
I tore into this big-boned sheep, made Marksy look about–
His dream of staying in the lead, was finally in doubt.

I passed him on the first hind leg, it’s not what he had planned–
For he had picked a bare–belly, but I’d the upper hand.
Three fast blows and the neck was done, I spun towards the chute–
To drop onto the “long–blow” then, above the ugly brute.

My first blow hadn’t touched the wool, I stood against the odds–
A great hind leg at savage speed, lashed out and whacked my cods.
You couldn’t get a straighter hit, no matter how you tried–
I dropped and crumpled up in pain, as tears of rage I cried.

I raised myself in agony, I wished I’d had a gun–
The scrubber lay there on its back, it knew what it had done!
Still, with straight, taught, quivering legs, my eyes were black with hate–
I struggled slowly to my feet, to seal this mongrel’s fate.

With every bit of energy, I had inside of me–
I leapt high off the shearing floor, came down with pointed knee.
But as I went to drive down hard, the sheep–gods did applaud–
The mongrel moved, just as I speared, my knee into the board.

I dropped just like a sack of wheat, right where the wether lay–
Humiliation and the pain, I carry, still today.
Then it left its final mark, the rotten, stinckin’ coot–
Jumped up and kicked me in the mouth, as it flew down the chute.

With busted knee and bleeding nose and very painful nuts–
I hoisted up my battered frame, in blood and second–cuts.
When suddenly behind me, whack! A king hit as before–
I turned around to grinning Fred, as he lay down the law.

“You’ll never make a shearer while your bum points to the ground–
By being tough and agro boy and knockin’ hoggets ’round.
Just splash cold water on yer spuds and knee and bloody face–
And change your comb and cutter Rod and get back in the race”.

Sometimes I sit and think about, work practices of old–
I know that we were all ripped off and left out in the cold.
See, we got nothing way back then, just lots of good advice–
From mates of yours who taught you not to be a drongo twice.

And when I get these headaches harsh and pain in knees and crutch–
I think about those “grand ol’ days” and good advice and such.
But when I see a sheep’s hind leg, those memories unfold–
And take me back to Tolliness, when I was drop–kicked cold.