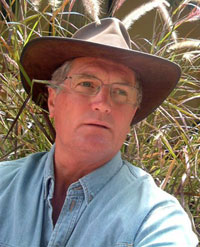 Wayne lives in Victoria Park, Western Australia. He is available for appearances and would love to hear from you.

Bluey McNab, the blue manna crab, lurks under the Mandurah Bridge.
It’s Bluey’s lot, avoiding the pot, and chill of a fisherman’s fridge.
Never the stooge – he’s grown to be huge, by dodging the drop-net and scoop.
Bluey’ll snigger – grow ever bigger – determined to not become soup.

Fishermen try – frustrated, some cry – use every trick in the book.
He thinks it’s great, whilst nicking their bait, he laughs as he hears them go crook.
Blue’s not a fool – he’s laid back and cool – as others are going to pot.
For knowing the lark, when it gets dark, he’ll nick what the crab-catcher’s got.

Blue loves to dance – to fling, jig and prance, and won’t miss a fisherman’s ball.
At one Crab Fest, Blue bagged a nest, of shonky old cods by the wall.
The more he’d chew – the more Bluey grew – the bigger his appetite got.
The bigger his claws – size of his jaws – less frequently fishermen squat.

Blue knows a prize – a good gauge of size, and slick with a button and zip.
Bluey McNab’ll nab two in a grab – with a flash, and gnash, and a nip.
He’ll spot a meal to snap out with zeal, and often he won’t spare the rod.
As king of them all, Blue has a ball. He’s gelded a thousand, the sod.

Mandjar Bay Choir singeth now higher. The bass man’ll raiseth, a shriek.
It’s choral range, has undergone change. A baritone altoed last week.
Blue’s trip to Loch Ness, was where (I guess), he tasted the fruits of the kilt.
No more to roam – a ‘True Blue’ at home, and watching us now, from the silt.

Experts don’t know what makes Bluey grow – his tenderloin fetish, perhaps?
At six feet across, Bluey’s the boss. The estuary jumps when he snaps.
The dolphins salute, pelicans hoot – the ‘Blue Vigilante’s a mate.
He will patrol, from inlet to mole, to keep us all honest and straight.

Bluey loves kids (supporter of SIDS) – Red nose for fishery fairness.
Fish wise and fair, lest Bluey be there, gauging bag limit awareness.
You needn’t fear that Bluey is near. Just don’t take undersized fish.
For if you do, and Bluey spots you, you could be his tenderloin dish.

Big eyes he wipes, when Blue hears the pipes, or poems of old ‘Rabbie’ Burns.
He’ll soldier on – his slouchie he’ll don, ’til every bad fisherman learns.
He fights the good fight, night after night. Blue’s the wee fishes’ Ralph Nader.
Come hell or high tide, no one can hide, from our ‘Crustacean Crusader’.

No one’s exempt to fish with contempt, and no one escapes Bluey’s eyes
Constable Care, leapt high in the air. Blue checked his oysters for size.
Should you fish at night, catching the sight – A kilt, in the shadows, you see.
Pour him a Scotch, (still girdle your crotch), Shout “Bluey! A wee nip fer ye!”